Eva Wiese is a social neuroscientist and cognitive psychologist interested in mind perception, embodied cognition and human-robot interaction. Eva holds a MSc in Psychology and Applied Computer Science from Otto-Friedrich University Bamberg and a PhD in Neuroscience from Ludwig-Maximilian University Munich. Eva’s lab examines causes and effects of mind perception and its effects on social cognitive processing in short- and long-term human-robot interaction using behavioral and neurophysiological measures. Aziz is a fourth year PhD student in the SCI Lab. He is interested in investigating neural indices of social behavior such as social attention in Human-Robot Interaction and how social information can influence action monitoring in social tasks. He is interested in using neuroscientific methods such as EEG, fMRI, and Brain Stimulation. His interests also include using quantitative methods to test for research questions, as he is an avid R programmer. When he is not investigating human-robot interactions, he’s either playing guitar or he works on his woodworking skills to become a luthier. Nicholas is a first year PhD student in the Human Factors & Applied Cognition program at George Mason University. Nicholas recently graduated from the University of North Carolina at Greensboro where he received a B.S. in Psychology. Prior to attending George Mason University, Nicholas worked as an undergraduate research assistant in a cognitive psychology lab where he studied executive control and mind wandering. He is particularly interested in using neurophysiological measures to assess characteristics of human-robot interactions such as companionship and mind perception. In his free time, Nicholas enjoys backpacking and outdoor rock climbing. Noushin is a first year PhD student. Her higher educational journey started with an associate degree in software engineering. After earning B.S in psychology she received her MSc in Psychology from the largest and the most prestigious human sciences university in Iran. She is interested in learning social neuroscience and its application on social robotics. Working on an autonomous, programmable humanoid robot (NAO) led her to research on human-robot social bonding and interactions. She loves solving all kinds of puzzles ranging from jigsaw and Sudoku, to Rubik’s cubes and Legos! She cares about animals and the environment and follows every method and life style that helps her to be healthier and happier. 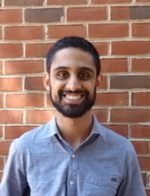 Ali received his B.A. in Psychology at the University of Maryland-College Park and his M.A. in Human Factors at the Catholic University of America. While his main research interest is the impact of face perception and mind perception on human-robot interaction (HRI), he is also interested in social and behavioral modulators of social attention in HRI. Outside of science, Ali is an avid television watcher, he enjoys exercising, and loves listening to music. Stephanie is a doctoral student in George Mason University’s Human Factors and Applied Cognition program. Her research is focused on how people interact and socially perceive Artificially Intelligent agents and modeling cognitively plausible AI. In recognition of Stuart Russell’s  “value alignment problem” and AI safety, the goal of this research is to develop design criteria for AI that leads to mutually cooperative Human-AI interactions within naturalistic environments (mostly video games). Patrick Weis is a fourth year PhD student in the SCI Lab. His research interests include psychophysiology, human-technology-interfaces and embodied cognition. Currently, he examines when and why people recruit external resources like computers or robots to help them solve cognitive problems. Patrick received a B.Sc. in Psychology, as well as a M.Sc. in Neural and Behavioral Sciences from the International Max Planck Research School of Neural and Behavioral Sciences. In his work, he uses diverse methods including Eye-and Mouse-Tracking, ECG, EDA, EEG, fEMG, Psychophysics and EMS. Victoria received her B.S. in Psychology from Radford University in 2012. She started her Masters in Human Factors and Applied Cognition at George Mason University in 2018 where she began working in the Social Robotics lab as a research assistant. She is interested in UX/UI research and design. Esha earned her Bachelor's in Psychology, Performing Arts and English Literature from Christ University, Bangalore, India in 2015. She completed her Master's in Human Factors and Applied Cognition Psychology in 2019 and is currently working with Dr. Eva Wiese in the SCI Lab. Her current research focuses on user experience and interaction with automation and social robotics. She is also a trained vinyasa and yin yoga practitioner along with intensive training in Vipassana Meditation and Pranayama Breathing Meditation. Sofie Therkelsen is a senior at GMU majoring in psychology. She transferred from Aarhus University, Denmark where she studied cognitive science. Sofie's research interest include social and cognitive neuroscience, statistics, and computational modeling. In her free time, Sofie enjoys baking, hiking, and spending time with her dog.