The goals of the HeART Lab are

1) to create a better understanding of how we utilize and maintain cognitive resources in order to reduce accidents in professions that require system monitoring, and

2) to investigate the use of new displays and automation for military systems.

Humans can expend a considerable amount of mental energy while performing monitoring tasks, such as airport security screening or air-traffic control. Since this mental energy is finite, people cannot maintain focus over large areas or for long periods of time.

The members of the HeART Lab are currently investigating optimal systems for providing maximal situation awareness, how people perform during long-duration tasks, and the effects of transitions in task load on performance. We use a variety of techniques, including Transcranial Doppler Sonography (TCD), functional Near Infra-Red Spectroscopy (fNIRS), subjective workload assessments, and personality and stress measures to examine these issues.

Our lab uses Transcranial Doppler Sonography (TCD) to obtain biological information about mental workload during experiments. TCD uses sound to measure cerebral blood flow velocity (CBFV), which we can use to determine changes in the amount of cognitive processing over time. Unlike commonly used brain imaging techniques such as fMRI and EEG, TCD is relatively inexpensive and allows participants to move during experiments. The unrestrictive nature of TCD allows us to more accurately recreate scenarios that operators encounter outside of the lab. 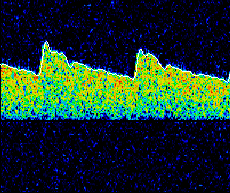 In airport security and air traffic control professions, operators must respond correctly to potential dangers. A failure to detect dangerous situations can result in catastrophe. Many of these jobs require operators to use a process called vigilance, which is the act of detecting infrequently occurring signals over an extended period of time. Research has shown that as time passes in vigilance tasks, people become less accurate in detecting critical signals, especially when the events requiring detection are infrequent and unpredictable. Current research suggests that vigilance tasks are stressful and that decrements in performance are caused by a lack of available mental resources. Our lab is currently examining how motivation, emotional states, and personality affect participants' performance and mental workload in vigilance tasks.

In military settings, vehicle operators need to be aware of their surroundings in order to properly identify targets and avoid friendly fire. In order to maximize 360° local area awareness, the army is developing an indirect-vision display system (IVD). However, simply providing a 360° display to operators is not enough to sufficiently improve performance; the display system needs to be compatible with human-perceptual processes. In order to better understand the processes operators use while interacting with IVD systems, we are conducting IVD simulations while using TCD and eye tracking to measure cognitive processing. Also, our lab is analyzing how individual differences, such as working memory capacity and personality, affect situational awareness.

People in workplace environments perform tasks that vary in difficulty and cognitive processing. Understanding how the brain functions under variations of cognitive workload may assist the development of adaptive automation systems. Our lab is currently using a UAV control simulator combined with TCD to examine changes in cerebral blood flow velocity when people transition between tasks of varying difficulties.