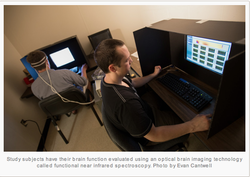 A new study by University Professor Raja Parasuraman shows that giving the brain a little jolt can accelerate learning and memory.

Using a non-invasive brain stimulation technique called transcranial direct current stimulation (tDCS), Parasuraman and colleagues recently showed that brain activity increased and participants improved almost twice as fast as those not stimulated on a difficult learning task — and that the benefits of this stimulation lasted over a 24-hour period.

The results of the study were published in PLoS ONE.

Electrical stimulation of the brain is not a new technique — in fact, Parasuraman says it has a long, albeit sporadic, history of almost 2,000 years. In the 1990s, when magnetic resonance imaging (MRI) was introduced, this technique was much improved. Psychologists could now connect the stimulation to neuroimaging results and deliver the electrical current in a more controlled way.

Though most of the uses of tDCS are for rehabilitation of clinical disorders such as stroke and epilepsy, Parasuraman’s interest is in normal cognitive function. “We want to see if we can enhance learning and memory in normal, healthy adults.”

This work is part of the research conducted at Mason’s Center of Excellence in Neuroergonomics, Technology and Cognition (CENTEC) and was funded by both the Air Force Research Lab and the Air Force Office of Scientific Research. The study involved a difficult soldier training exercise. Participants were asked to take a threat detection test, but were given no more instruction than to push one button if they detected a threat and another if the situation was safe.

“This is called discovery learning,” says Parasuraman. “You learn as you go, so when you first start out, most people are at 50 percent accuracy — basically guessing. However, most will improve over time.”

The participants went through several sessions of the test and were measured to see how much their accuracy improved each time.  The electrical stimulation is delivered via a battery — operated device, so there is no danger of shock to the participants. Electrodes are placed on the participant’s head and circuitry in the device ensures a steady current is maintained.

One group was given 2 milliamps (mA) of electrical stimulation, and the other group, the control group, was given only 0.1 mA. The stimulation was applied to the prefrontal cortex area of the brain, which had previously been identified in a functional MRI study to be the main brain region involved in learning the threat detection task. The group with the stimulation improved nearly twice as much as the control group and learned almost twice as fast.

The groups were then tested again an hour after the session with no stimulation, and again after a 24-hour period.  The group that had 2mA tDCS maintained their accelerated learning even after a day of rest.

“Our next question is, can we take this over a week? How long the effects last will have a big impact on whether or not this can be used in practical applications,” Parasuraman says.

So, why does it work? Parasuraman says that the membrane of a “resting” brain cell (neuron) is negatively polarized — about -70 millivolts. The neuron “fires” only if an incoming stimulus can increase the resting potential positively (depolarize). Imagine standing about halfway up a hill with a bowling ball and wanting to push it over the other side. You would first have to push it up the rest of the incline to the top of the hill before releasing it.

Whenever you look at or hear something, you send a stimulus to a cell in your brain, and that triggers a reaction, resulting in the cell firing. If the input is above a certain threshold, then another neuron will fire, and this continues, creating a chain reaction that allows our brains to work.

TDCS is thought to work by raising the resting point of the neuron just a little — In essence, giving it a boost so that it can more easily fire. So instead of starting in the middle of the hill with that bowling ball, you might get a lift up to the top, so it’s much easier to roll that bowling ball down. In direct stimulation, the current is giving the brain a little boost to work more easily — and therefore learn faster or remember better or react faster.

Parasuraman also would like to study how this stimulation might affect older people with deteriorating brain function.  Though he believes that this research has the potential to boost learning and memory in normal adults, he does recognize that there is a limit. People without any stimulation do eventually get to the level of learning of those who were stimulated, but it just takes longer.

“It’s not that we’re making people into superstars, we are just accelerating how fast they learn,” he says.